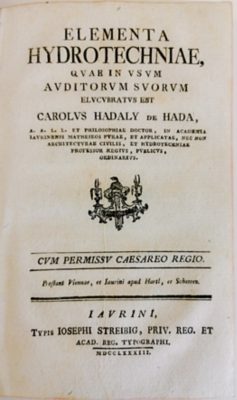 New to the rare books collection is this 128-side treatise on the mathematics of natural river dynamics. Published in 1783, Elementa Hydrotechniae contributed to an influential and growing body of literature in the late-19th century that came to encourage river landscape engineering projects, such as the correction of the course of the Rhine under the direction of Johann Gottfried Tulla, which began in 1817.

The historical importance of works such as this treatise cannot be over stated. Then as now, rivers provided key transport ways for commerce and industry and a source of power for mills, whilst their unpredictable flooding posed significant challenges, threatening both settlements and vital agricultural lands. Establishing and disseminating a mathematical understanding of the nature, strength and potential of rivers was an important step in providing a foundation for engineering projects designed to either reduce flood risks or take the power of rivers and direct it in such a way as to be of greater economic benefit.

The treatise makes a valuable addition therefore to the existing holdings of the Iron Library, which has very well established collections on the history of waterways and water transport technology. These begin with Aristotle's speculations on the annual Nile inundation in our 13th century Albertus Magnus manuscript, and range through the centuries to works from the history of pumping stations near Versailles, Casper Walter's 1765 Architectura Hydraulica, and many more on topics as diverse as hydroelectric power and the evolution of piping systems.

The treatise is split into theoretical and practical parts, together totalling 241 numbered paragraphs, with 17 sides of tables and two folded engraved plates featuring 26 figures. The six chapters of the first and theoretical part cover the basic premises of the treatise (I), the natural river (II), the different states of the river (III), the rate of river flow (IV), the force of water (V), and the pathways of rivers (IV).  The seven chapters of the practical part of the treatise cover the dimensions of rivers (I), wickerwork structures (III), the protection of riverbanks (IV), technical rigs (V), the draining of marshland (VI), and the navigability of rivers (VII). 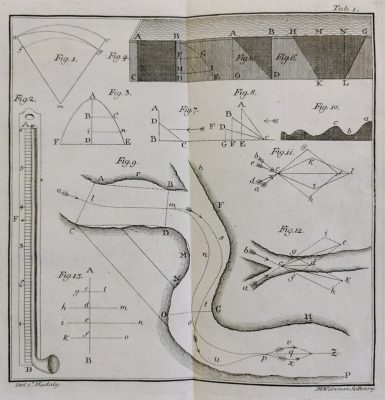 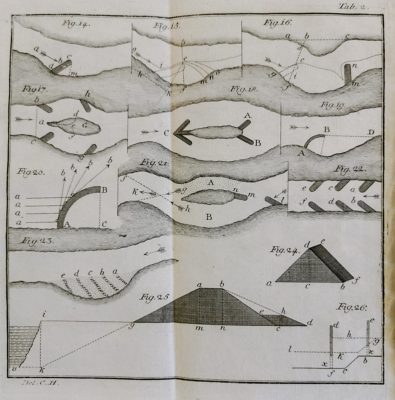 The author, Carl Hadaly de Hada, was a Hungarian mathematician born Sümegher Comitate, Hungary, in 1743. He studied pure and applied mathematics, as well as civic architecture and hydraulic engineering at the Royal Academy at Győr (Hungary). This, the first edition of his teatise, was published by Joseph Streibig in Győr in 1783, whilst Hadaly de Hada was Professor of Mathematics at Trnava (Slovakia). Elementa Hydrotechniae was in demand and went through seven editions, establishing the name of the author. After its publication, Hadaly de Hada returned to teach at Győr for a short period in 1786, before moving on to Pécs where he remained until 1809, when he took up a chair at the University of Pest. His career was spent publishing extensively on color science, mechanics, pure mathematics and geometry, up until his retirement at the age of 88 in 1831. Hadaly de Hada was honoured in his career with membership of the Academy of Science in Göttingen and a Knight's Cross of the Order of Leopold.