Product catalogs and other "gray" treasures

The Iron Library houses considerable treasures in printed form. They include company publications, product catalogs and price lists collected by the library. In many cases, they are not very old, but often they are rare. It is not at all unusual that the Iron Library has a copy of a publication that can't be found in any other library that makes it holdings public and visible online.

As a rule these publications come under the heading of "gray literature" – this has nothing to do with the color of the dust jacket or the grayscale illustrations. This literature is known as "gray" because the materials and catalogs are generally speaking not published by traditional publishers or sold in bookstores, but are printed and distributed by the company or the firm's owner. In addition, such catalogs and price lists were printed to serve a function and after a short time may well have been considered out of date and no longer of any use. Under no circumstances were these publications intended to be preserved for a century or more, and this can cause no end of problems for the library that has to keep them because they were not meant for long-term conservation. Such literature falls into the category "out of sight, out of mind" – in many cases it's hard to realize that it may be a valuable – and perhaps even the only – document of its kind illustrating the company's history or its products. That's reason enough to take a look at some product catalogs and related materials that the Iron Library has acquired in the recent past. 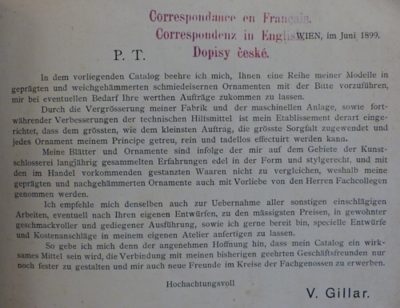 "Wrought-iron leaves, tulips & rosettes"
We'd like to start with the "Price book", dated May 1899, in which a certain V. Gillar, domiciled in Siebenbrunnengasse 9, in Vienna's 5th District, offers "wrought-iron leaves, tulips & rosettes" from his own factory. Who is this V. Gillar? Is it a small workshop with mainly a local clientele in Vienna? The product catalog is rather elaborate, suggesting that the company aimed at a more far-flung market. The stamp on the catalog's first page, offering to conduct correspondence in French, English and Czech, also certainly points in this direction.

So is V. Gillar perhaps even an artisan who has left some trace in Vienna's art history? We're going to hunt for any traces that Gillar may have left, traces that can be found by means of digital tools and sources.

The "Price book" itself contains 39 plates showing models of "embossing and repoussage of wrought-iron ornaments", followed by a price list in Austrian guilders. V. Gillar addresses his customers  as follows: "As a result of expanding my factory and the machinery … my establishment is equipped in such a way that every order, be it large or small, can be carried out with meticulous attention to detail and every ornament can be completed with impeccable accuracy, in keeping with my principles."

Who was Valerian Gillar?
Let's go (virtually) to the Municipal and Provincial Archives of Vienna. The Viennese archive information system contains a digitized registration form pertaining to Valerian Gillar. From this form we learn that Gillar was an ornamental metalworker and purveyor to the imperial court ("K. u. k. Hof Bau- und Kunstschlosser") who was born in Freiberg in Moravia (Příbor) on 28 April 1839 and died in Vienna on 23 January 1927.

The Vienna Municipal and National Archive also refers us to the website "Wien Geschichte Wiki", which has a short article on Valerian Gillar. This site erroneously states the place of birth as Freiburg rather than Freiberg in Moravia (Příbor). Incidentally, this is also the place of birth of Sigmund Freud, who was born 17 years after Gillar.
The Vienna address book for 1899 – Adolph Lehmann's allgemeiner Wohnungs-Anzeiger – has been digitized and confirms Gillar's address in Siebenbrunnengasse, which we can still find without any difficult in a modern-day map of Vienna.

The "stylish works" by Gillar, Court purveyor of ornamental metal works
To come back to our original question – how well known were Gillar and his metal-working products and did they leave any traces? – we can find answers in the Austrian press of the day. The Austrian National Library operates the portal Austrian Newspapers Online (ANNO), which provides excellent access to digitized journals and newspapers. A search for Valerian Gillar in ANNO yields 200 hits in Austrian journals and newspapers in the period from 1870 to 1930. Here are a few snippets:

- The 15 August 1880 edition of the newspaper "Das Vaterland" reported that Gillar took part in the Lower Austrian industrial fair: "… we find the stylish works by Gillar, including a chandelier, a console with a lamp, door and window fittings, a lantern, two drapery ties, and lamps in wrought-iron chased work in the Renaissance style …"

- Gillar's participation was a success and he received a medal (first-class), as we learn from the 18 September 1880 edition of the "Wiener Zeitung".

- On 6 May 1881 we read in the "Morgen-Post" that the Emperor awarded Gillar, the Court purveyor of ornamental metal works, the golden Cross of Merit.

- The "Wiener Zeitung" dated 25 November 1886 reported, in article entitled "Dishonest Workers", that "in recent weeks valuable drawings, tools and models had been stolen" from Gillar. The police had now succeeded in arresting three workmen for the thefts.

- The "Grazer Volksblatt" dated 3 July 1894 carried a report on the "Exposition Internationale" held in Antwerp that year: "The Vienna Association of Arts and Crafts was represented in particular by: … Valerian Gillar, who displayed a hand-made wrought-iron clock and two ornamental branched candlesticks of the same design as the clock…"

- Gillar also took part in the Paris "Exposition Universelle" in 1900. The "Deutsches Volksblatt" of 10 April 1900 praises the "extremely narrow columns" in the showcases from Gillar's workshop "which fully bring out the qualities of the goods displayed."

- One place where Gillar's art can still be admired is the Herz Jesu church in Vienna. In "Der Bautechniker" dated 21 December 1906 we read about the door fittings produced by Gillar for the entrance. "The wrought-iron work was produced by Valerian Gillar's metal-working shop and are worthy of particular mention. In particular the fittings for the entrance doors which are in a sturdy Romanesque manner, very stylish and powerful in their effect."

- "Der Bautechniker" dated 28 December 1906 reports that Gillar had opened a branch in Herrengasse 5 (i.e. in the Brassican-Wilczek Palais) "for the convenience of his clientele, where he displays samples of lamps for gas and electric lighting in brass and copper." Gillar had placed an announcement in the same issue, advertising his company as "the oldest firm for wrought-iron balcony rails and banisters, garden fences, etc."

A lot more information about Valerian Gillar and his activity as a craftsman could be reproduced. Thanks to the digital sources and resources that various Viennese institutions have made available online, we have the bare bones of a description of the man and his company whose products were advertised in the 1899 "Price book".