The favorite book of Franziska Eggimann 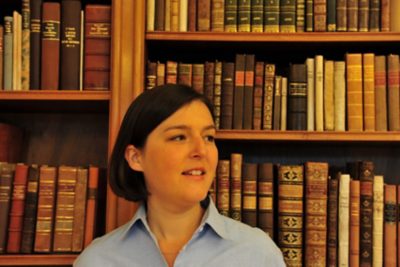 ...took over as Head of the Iron Library and the Georg Fischer Corporate Archive in September 2013 and moved her workplace from the archive of Einsiedeln Abbey to Klostergut Paradies, a former convent that now belongs to Georg Fischer. As an historian with her roots in Zurich, she had previously studied the history of "confessionalization" in some depth, so she was immediately excited about the manuscript describing the Papal bell in the Iron Library.

In 2007, the Iron Library established a "treasury", a special room where its most valuable books, hitherto locked away in a safe, could be viewed and properly admired behind glass. One such treasure is a manuscript written by Giuseppe Valadier (1762-1839). It is a thin folio volume that needs to be seen up close to appreciate its true value. Since the book is displayed open, the leather binding with the coat of arms of Pope Pius VI (1775-1799) in gold tooling is not visible.

Pope Pius VI ordered a bell for St. Peter's in Rome from the Roman goldsmith Luigi Valadier, which caused quite a commotion among Rome's envious bell founders. Why should a goldsmith, they wondered, be so honored by the Pope? Luigi Valadier died before he could complete the commission, but it was finished by the master's son, Giuseppe, who dedicated this manuscript to his father. Featuring 14 pen and ink drawings with watercolor, it describes in detail the casting of the bell.

Giuseppe Valadier was a famous architect and a leading exponent of the classicist style in Rome. As a town planner, he designed numerous buildings and squares – including the Piazza del Popolo – and fought tenaciously to preserve ancient monuments such as the Colosseum.

The bell, which is known as "il campanone" (Italian for "the huge bell"), is still in use today at St. Peter's Basilica. It is the second largest bell in Italy, weighing in at 10 tons.

The Vatican recently became aware of Valadier's manuscript – The Iron Library's hand-written document is, of course, unique – and requested a copy for its documentation in the Vatican Archives, a request with which we were pleased to comply.

Have a look at Valadier's illustrations!

Applying the black wax ornaments
Raising the outer bell from the casting pit
The finished bell, with inscriptions, pictures and coats of arms
The casting of the bell
Blessing of the bell in St. Peter's by the Pope
1/

Valadier's manuscripts in the catalog of the Iron Library