New in the collection of old and rare books on chemistry is one of the nineteenth century's most influential textbooks: 'Grundlehren der Chemie in technischer Beziehung. Für Kammeralisten, Oekonomen, Techniker und Fabrikanten' (Basic teachings of chemistry in technical terms for Administrators, Economists, Technicians and Industrialists) by Johann Joseph von Prechtl (1778-1849).

Prechtl was a technologist and educator based in the Austro-Hungarian Empire who believed passionately in science's potential for bettering the world. To this end in 1815, he was appointed first director of the Imperial and Royal Polytechnic Institute that has since become the TU Wien. A prolific author, he wrote numerous publications on a wide variety of technical and scientific topics, culminating in a 'Technological Encyclopedia' (from 1830), a complete edition of which sits on a shelf in the Iron Library's reading room.

The newly acquired work authored by Prechtl is a two-volume edition of 'Grundlehren der Chemie'. Within, it covers the bases of chemistry through to its applications – beyond theory and chemistry's study for its own sake. These volumes are a testimony to the foresight with which their author promoted an active learning culture at the intersection of science and industry.

The first volume provides overviews of the qualities of the then known chemical elements and common chemicals such as hydrogen, carbon dioxide, sulphur, oxygen, water and ammonium. After this, it moves on to the different forms of acids and salts, and their particular applications, for instance sources of citric acid and their use in the dying industry. In the second volume there follows among others an extensive treatise on the chemistry of coal and petroleum and the products that can be derived from them.

Prechtl's interest in coal, the chemistry of fire and energetics was large and led to projects such as the introduction of gas powered street lighting in Vienna in 1816. For the history of Georg Fischer, therefore, Prechtl was indirectly a very important figure. His demonstration of the viability of gas-powered lighting led to its widespread introduction, creating a demand for gas transport infrastructure and a market for what was to become one of GF's most defining and profitable products: the malleable cast iron fitting.

Indeed, Prechtl's writings have earned him a reputation as one of the founders of the modern chemical industry. Historian of chemistry Christian Hantschk has stated that without the pigment industry that emerged from Prechtl's developments in the coal industry, the strong branches of today's chemical, pharmaceutical and plastics industries would be inconceivable. For the early history of plastics, now major part of the Library's collections, this acquisition therefore takes on a particular importance. 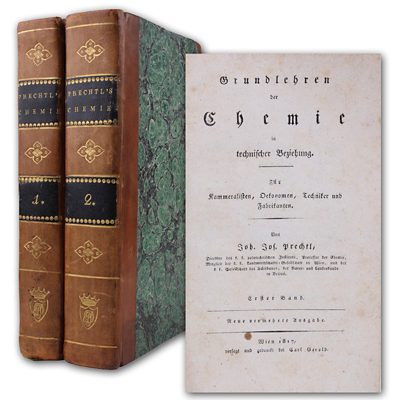 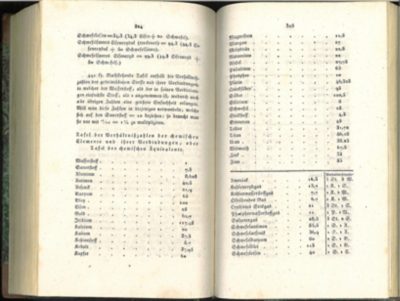 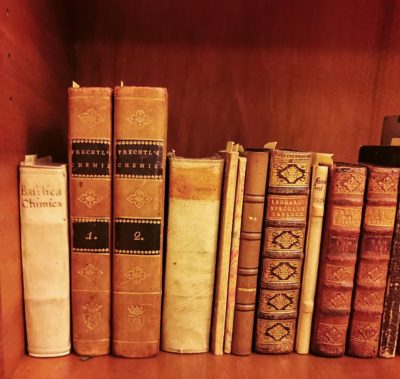 The volumes on the shelf in the Ernst Müller Room
1/

One of the nineteenth century's most influential textbooks