As part of his research project on the former königlich-preussische Eisengiesserei (Royal Prussian Iron Foundry) Sayner Hütte, Florian Fichtner is focusing on the early industrialisation of (iron) metallurgy, mechanical engineering, industrial architecture and the promotion of trade and industry. Alois Wehrle's (1791-1835) Textbook offers a very broad fund of information on the state of metallurgy in Europe in the first 30 years of the 19th century. In addition to a few mentions of the Sayner Hütte, the three-volume copy of the Iron Library is particularly inspiring due to the wonderful state of preservation of both text volumes and the atlas. 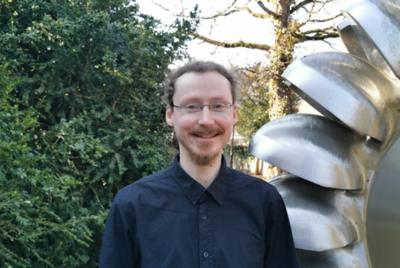 ...is a research assistant at the Institute for Industrial Archaeology, History of Science and Technology (IWTG) at TU Bergakademie Freiberg. He is doing his doctorate on the history of the Sayner Hütte Ironworks near Koblenz and, as a graduate of the industrial archaeology course, is interested in the legacies of industrialisation and their past and present significance for society.

The book that I would like to read a sequel to...
...is a book about the 'peaceful' years of the Hobbits between Bilbo Baggins return to the Shire at the end of "The Hobbit" and the beginning of his journey to Rivendell in "The Lord of the Rings".

The book currently on my bedside table...
...plays to some degree a role in my project on the Sayner Hütte, as the technical equipment of this ironworks was perceived as novel and therefore caused excitement both in the 1830s and in the more recent past and present. It is "Spektakuläre Maschinen - Eine Affektgeschichte der Technik" by Daniel Strassberg.

Before his death in 1835, Alois Wehrle (1791-1835) wrote his textbook as professor of mineralogy, chemistry and metallurgy at the 'k.k. Bergakademie' (Imperial and Royal Mining Academy) in Schemnitz (Banská Štiavnica). According to his preface of 1833, he intended this three-volume publication "to facilitate the study of sampling and metallurgy for beginners, to teach them the scope of these sciences, and to acquaint them both with the methods used to find and extract metals and with the principles on which these methods are based". In order to make this subject accessible to beginners, he had "carefully avoided all interruptions and divisions which often deter the beginner" and had written "the purpose of each process, the advantages, disadvantages, results and theory of the same" in a "narrative style".

Industrial archaeologists or historians of technology as humanities scholars with a passion for technology can still benefit greatly from this implementation if, like me, they view technology and techniques with a "beginner's eye".

Wehrle claims to have taken into account the usual procedures and processes both "nationally" and "abroad" as well as "all important recent discoveries, improvements or expansions". To this end, the 'k.k. allgemeine Hofkammer' (Imperial and Royal General Court Chamber) had granted him "not only the right to visit all the iron and steel works in the Austrian Monarchy, but also the right to use all the archives and records of the Court Chamber relating to sampling and metallurgy". Unfortunately, Wehrle, possibly in the interest of easier access for beginners, omitted references to the respective origin of the information. For example, he listed a special flame furnace with two melting chambers that was in operation at the Sayner Hütte. He described its advantages with short explanations and several drawings without referring to the origin of the data. In this way, important references were lost at first glance. At second glance, however, there is the obvious assumption that Wehrle took both the drawings and the accompanying descriptions from the six-volume publication 'System der Metallurgie' (System of Metallurgy; Berlin 1831-1832) by 'Oberbergrat' (Prussian senior mining councillor) Carl Johann Bernhard Karsten (1782-1853), which seem to be almost identical (description of the flame furnace in volume 4; drawings of the flame furnace in volume 6). In any case, this flame furnace remained in the interest of the Austrians in the 1830s. The model-making workshop of Alois Harder (1769-1857) in Vienna, for example, produced a model of it on a scale of 1:25 (today in the collection of the Vienna Technical Museum, inv. no. 9.870) for a collection of technological models of the 'k.k. National-Fabriks-Produktenkabinet' (Imperial and Royal National-Factory-Products Cabinet) founded in 1807 on the orders of Franz I (1768-1835).

The flame furnace, which was put into operation in the course of the modernisation of the Sayner Hütte in about 1830, was first presented to a wide audience in Prussia by Karsten's 'System der Metallurgie' (System of Metallurgy) on the basis of technical data. Subsequently, various other authors or publishers also adopted this data, possibly including Alois Wehrle.

Wehrle's textbook is thus an example of the dissemination of knowledge and experience in the field of metallurgy at the beginning of industrialisation. Using the Sayn flame furnace with its double melting chamber presented in the textbook, it can be shown in retrospect how exemplary models of processes and plants used at a national and international level found their way into academic teaching. However, it seems conspicuous that Wehrle only refers to this flame furnace and a few other technical devices from the Sayner Hütte and fails to mention the technical and architectural equipment of the cast-iron casting hall. This casting hall by Carl Ludwig Althans (1788-1864) still delights tourists today, as it did almost 200 years ago. Nevertheless, even Karsten's 'System der Metallurgie' (System of Metallurgy) only hints at this aspect with a simple pictorial representation on the cover of the atlas. Both publications thus concentrate strictly on their field of expertise. It remains unclear why there seems to be no contemporary publication from the field of civil engineering and architecture dealing with the cast-iron casting hall in Sayn. 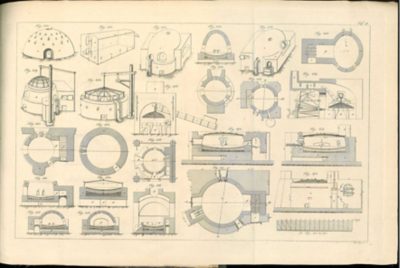 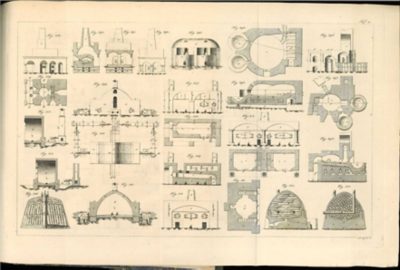