The favorite book of Federica Gatto

What connects the automobile industry with antiquity? On first appearances, not much. Nevertheless, classicist Federica Gatto chose a 1947 publication by the car manufacturer Fiat as her favorite book in the Iron Library. The stylish history of the traditional Italian company fascinated our Scholar in Residence not only out of national pride: she actually found parallels in it to the metal industry of ancient Rome! 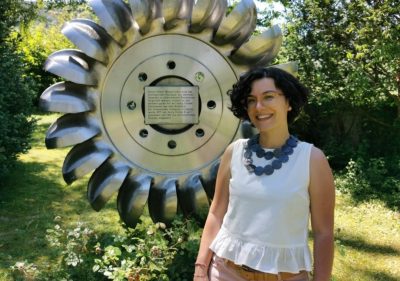 ...is a postdoctoral researcher at the Centre d'étude des Mondes Anciens at UCLouvain (Belgium). She has studied at the Universities of Siena and Cantabria. Her project "Gods of Mines and Quarries in the Roman Empire" is funded by the Belgian FNRS. The  objective of her investigation is to link the stages of the work-chain to the spheres of action of Roman gods honoured in mines and quarries, in order to understand how divine forces interacted with the needs of people working in natural resource extraction areas. Her research therefore adds an anthropological and economic perspective to the study of the mechanisms of Roman polytheism.

The book in which I would like to play a part…
…is “L’Iguana”, by Neapolitan writer Anna Maria Ortese (Milan, 1965). I want to participate in the expedition organised to the island of Ocaña, off the coast of Portugal. This was the destination of the expedition organised by the rich count Aleardo (Daddo), from Milan, the “buyer of islands”, and his friend, the editor Boro Adelchi. On board of the ship Luisa, the two friends set sail for an imaginary island in search of inspiration for a manuscript expressing the revolt of the oppressed (“dove si esprima la rivolta dell’oppresso”, p. 17), capable of awakening readers numbed by an excess of offers: namely the confessions of some madman, perhaps in love with an iguana (“Ci vorrebbero le confessioni di un qualche pazzo, magari innamorato di una iguana”, p. 17).

The book I would like to read a continuation to…
…is “Mines Antiques. La production des métaux aux époques grecque et romaine”, by Claude Domergue (Paris, 2008). This curiosity stems from the fact that I would like to see applied to the study of mining sites the methodology of "space archaeology", a discipline developed by the American archaeologist Sarah Parcack, which won her the 2016 TED prize.

Through the study of satellite images, the researcher selects clues to settlements frequented by ancient civilisations, often hidden beneath modern levels of exploitation. It would be very interesting to know if the application of new technologies of satellite imaging to identify potential archaeological sites, particularly mines and quarries which were obliterated by modern exploitation.

The book currently leaning on my bedside table…
…is “A little life”, written by the American novelist Hanya Yanagihara (2015). Four friends, united by extraordinary talent and fierce ambition, and their lives in New York, a place that ‘adheres’ to a story in which the present takes the sinuous form of each person's past. A profound examination of the weight of human relationships, particularly friendship, in the process of realisation of four thirty-somethings in search of their own place.

Among the rich collection of volumes concerning historical metallurgy, I have chosen 'FIAT. Terra Mare Cielo' as my favourite book (Iron Library Bw 370). The book is part of a celebrative series that the Italian car factory FIAT Automobili, based in Torino, Piedmont, published between the Thirties and the Forties of the 20th century. The whole collection can be found online at the “Deposito digitale” of the Politecnico di Torino. 'FIAT. Terra Mare Cielo' is volume 4 and was published in Turin in 1947 by the FIAT Press Service.

The volume caught my attention because of the large importance it gives to images. Each photograph, painting or drawing is accompanied by a short text, translated into French and English. The historical era in which the book was printed explains some of the stylistic choices. The graphic design shows the legacy of a fascist aesthetic, already evident in the choice of the title 'Terra, Mare, Cielo' and for the opening picture, a scene by the painter Felice Casorati. His opposition to fascism, which led Casorati to a brief arrest in 1923, did not prevent him from adhering to certain pictorial styles of the time, including magic realism, an artistic-literary current of German inspiration.

Leafing through the book, there is some common ground between the strategic choices made by the Romans, the protagonists of the literature on ancient mining history stacked on my desk, and those made by FIAT entrepreneurs in the early decades of the last century. In the first chapter, titled “Miniere FIAT”, the authors emphasise that at the beginning of the 20th century, when FIAT Automobili was set up in Turin, the production of vehicles required first and foremost the availability of raw materials, especially metals.

The nearest metal-producing districts were located in the Piedmontese Alps, one of the most resource-rich of the Italian peninsula. “FIAT carries on mining activities in different parts of the Piedmontese Alps, bringing mines, hundreds of years old, back to useful life and seeking out fresh deposits”, say the authors. There are two areas between Valle d’Aosta and Piedmont to which ancient literary sources allude regarding mining activity. Pliny the Elder refers to a censorship measure that in the Republican age concerned the 'aurifodinae Victimularum', gold mines belonging to the territory of Vercellae. It is in the Traversella mine and in the Canavese area in particular, where pre-Roman populations and Romans were searching for gold and silver, that FIAT searched for its raw materials.

As was the case in Roman times, at the beginning of the last century FIAT entrepreneurs chose an area where the required natural resources were easily available. 'Terra, Mare, Cielo' shows how the establishment of the FIAT factories in Turin brought with it a series of related phenomena.

The FIAT foundries were producing steel in ingots and castings (small and large, from one ounce to 30 tonnes), as well as forged and deep drawn parts. Other products included rolled sections and drop forgings in brass-bronze and copper-aluminium.

A good road network was necessary for the transport of the extracted raw materials during the activity of the FIAT factory, as well as in Roman times. The illustrated part of the volume closes with a picture of an unnamed road. The bridge to antiquity can still be built, however, as the course of a Roman road can be seen here.

Striking impressions from the book... 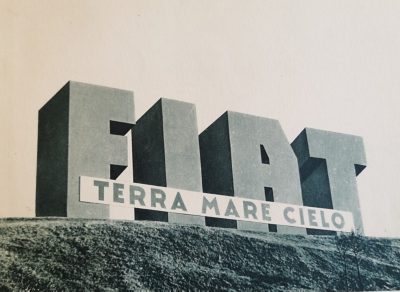 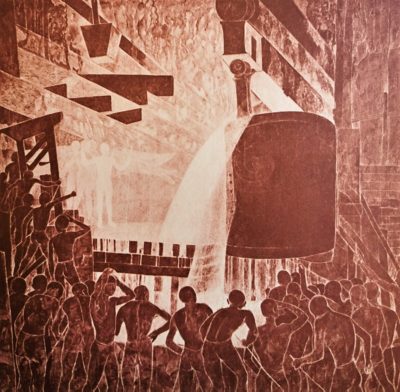 A stylised portrayal of work in a foundry by F. Casorati 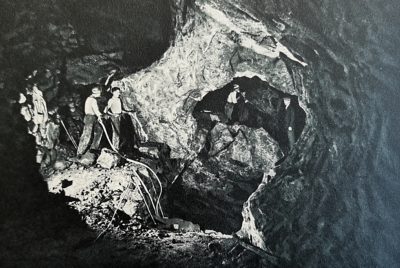 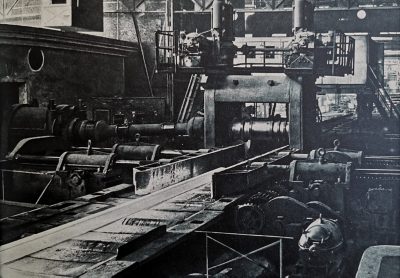 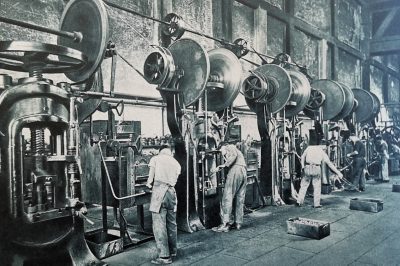 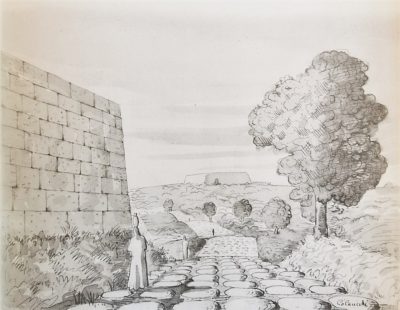 "Prima la strada" the expressive sketch of a Roman road by G. Colacicchi
1/

FIAT's book in the catalog of the Iron Library