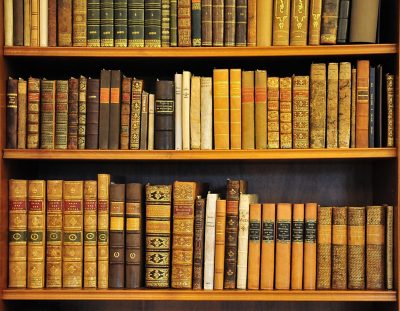 The Iron Library offers 750 years of literature on technology and science.

In keeping with the library's name - and its motto "Viris ferrum donantibus" - literature on the history of iron and steel was the original focus of the collection. Over the course of time, the focus has expanded to include selected sub-areas of the history of technology together with related disciplines (history of the natural sciences and engineering, industrial and economic history, etc.). In line with developments within the GF Corporation, greater attention will be paid in future to plastics and their history.

There are only a few special libraries worldwide in the field of the Iron Library's specialties whose holdings reach a comparable depth, breadth and completeness. In principle, all areas of focus are subject to the acquisition of both historic and new (historical) research literature. In some collection areas, non-historical literature is also acquired, such as on foundry technology, iron metallurgy and plastics technology.

With 47,000 items and 1,000 periodicals (70 of which are current) from eight centuries, the Iron Library is one of the largest specialist libraries in the history of technology and the history of iron and steel. The rara collection of old prints from before 1900 comprises around 6,000 titles.

Since 2015, the most recent focus in the acquisition profile of the Iron Library has been plastics - or as the revised Articles of Association of the Foundation state: "modern construction materials such as plastics and other polymeric solids and their applications, especially in areas of business in which GF is active". In the more than 200-year history of the GF Corporation, plastic products have been shaping the development of the Corporation for over 60 years. The publication "50 Years of Plastics Know-How", published in 2007, is an impressive testimony to this.

The traditional brand core of the Iron Library, iron/steel/history of technology, will now be complemented in a meaningful way by the new focus on plastics. The profile as a special library for construction materials in a historical perspective is being expanded and at the same time sharpened by the new focus.

Acquisition of collections
Expansion to the holdings through donations is being pursued continuously. In 2015, two book collections with historical plastics literature were taken over: one by the chemist Günter Lattermann (Bayreuth, DE), chairman of the German Society for the History of Plastics (dgkg), and the other by the chemist John Morgan (Berry Hill, GB). The largest donation to date was made in two stages in 2016 and 2020: Professor Dietrich Braun (Darmstadt) bequeathed his private library in the field of plastics technology to the Iron Library. Professor Braun, for many years director of the German Plastics Institute (DKI) in Darmstadt, was one of the most influential figures in plastics research in the second half of the 20th century. The former DKI now forms the Plastics Department of the Fraunhofer Institute for Structural Durability and System Reliability.

The catalog of the Iron Library