Chapter 11: Atlas for the manual of mining and metallurgy

The favorite book of Sebastian Haumann

Sebastian Haumann has been engaged in a research project on limestone as raw material of the iron and steel industry in the 19th century - a project that was supported by the Eisenbibliothek's Scholar in Residence Program in 2015. The special feature of his favorite book is that it illustrates the new processes at the blast furnace at a time when the technology was undergoing fundamental changes – and shows the blast furnace "in action".

... is a historian and currently works at the History Department of Darmstadt University of Technology. During the past years he has been engaged in a research project on limestone as raw material of the iron- and steel-industry in the 19th century - a project that was supported by the Eisenbibliothek's Scholar-in Residence Program in 2015. Before that he received a PhD from Darmstadt University of Technology with a dissertation on protest and urban renewal during the 1960s and 1970s.

The "Atlas for the manual of mining and metallurgy" is a special type of book: the volume contains plates, or illustrations, some of them large-scale, and was published as an annex to the manual itself. The author, Carl Hartmann (1796-1863) published the text largely without any illustrations, as was standard practice for similar works, and instead printed the illustrations in the accompanying Atlas. The manual of mining and metallurgy, and the accompanying atlas, appeared in 1858 and was one of the last of the numerous textbooks and manuals that Hartmann had published since the 1820s. 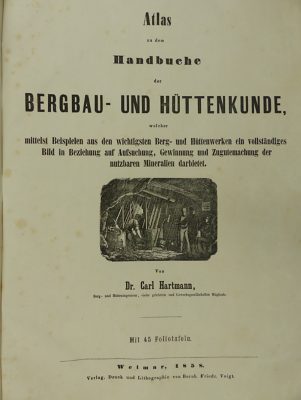 The large number of books to Hartmann's credit reflect the rapid and far-reaching changes in the industry that took place towards the middle of the 19th century. The most dramatic innovation was the switch in iron smelting from wood to coal, which made its breakthrough in the German-speaking world in the 1850s. The manual of mining and metallurgy from 1858 clearly mirrors these epoch-making changes. The changeover to a fossil fuel not only opened up new perspectives, it was also – and first and foremost – a challenge to smelting technology. The entire smelting process had to be revamped, starting with the choice of the raw materials – ore, coke and flux – right up to the design of the blast furnaces and even the processes in which the raw materials were prepared and charged into the furnaces. 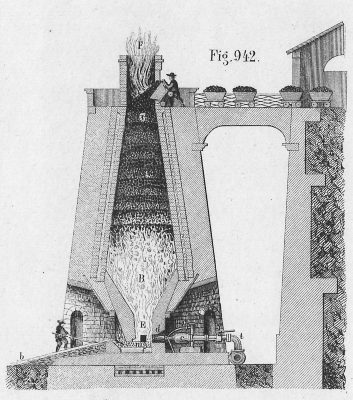 The special feature of Hartmann's "Atlas for the manual of mining and metallurgy" is that he illustrated the new processes at the blast furnace. Especially plate XLII is exceptionally valuable in this regard. Unlike most illustrations of the period, Hartmann not only showed a cross-section through a furnace but indicated the thermochemical process and the steps by which the process was maintained – in other words, he showed the blast furnace "in action".

Iron ore, coke and limestone flux were fed in a defined filling order through the hole at the top of the shaft (stack) and they descended into the white-hot heat down to the so-called bosh. It was important to charge the raw materials in layers that were as uniform as possible. The materials charged at the top gradually collapsed from the effect of the heat. The molten mass was then tapped through a taphole at the bottom of the blast furnace, where the temperatures were highest. Workers opened the taphole in the shaft and allowed the molten pig iron and the liquid slag floating on its surface to flow out.

Hartmann's illustration also shows clearly to what extent the methods were based on contemporary assumptions about the thermochemical process in the furnace, which could not be observed or measured directly at that time. A striking aspect of the illustration is the fact that Hartmann showed the layers of ore, coke and flux as they descended the stack, thus visualizing what he imagined was happening inside the blast furnace. The illustration clearly depicts the raw materials in distinctly separate layers falling down the shaft before becoming a glowing mass of pig iron and slag in the lower third of the stack. As they fell, the raw materials passed through several zones in which they decomposed from the heat and their components reacted with each other chemically.

The "Atlas for the manual of mining and metallurgy" illustrates the processes and concepts underpinning iron smelting at a time when the technology was undergoing fundamental changes. While there are numerous illustrations of blast furnace construction in similar textbooks and manuals, illustrations showing such furnaces "in action" are extremely rare. That's what makes the illustrations in Hartmann so special – the changes around the middle of the 19th century affected not only the technical facilities themselves but also, and in particular, the processes involved and the way these facilities were handled. In my view, the changeover from smelting with charcoal to smelting with coke – which marked an important step in the shift from solar to fossil fuels – is difficult to understand without the processes that Hartmann documented in his Atlas. 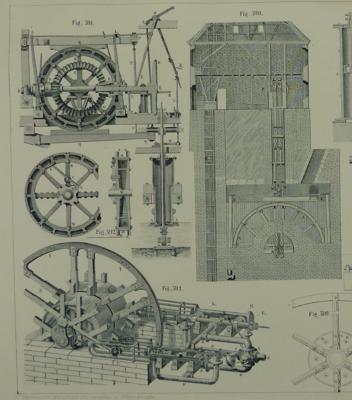 Hartmann's "Atlas" in the catalog of the Iron Library